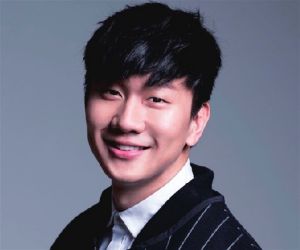 JJ Lin 林俊傑, Wayne Lim Jun Jie is a Chinese-Singaporean male singer. JJ sings in English, Hokkien (his native dialect) and Cantonese using romanized pronunciation system, and has released his songs in Cantonese. In Taiwan, he was awarded the Best New Artist award at the Golden Melody Awards.

After completing his national service, Lin signed with Ocean Butterflies International, which launched the then 22-year-old Lin's debut album in 2003. In 2011, Lin signed a new contract with the record label Warner Music Taiwan.

He is well known for his songwriting and singing skills. He has written songs for various musical artists while he was still a trainee under Ocean Butterflies under his mentors, Billy Koh and Sunkist Ng. Now, he has written over a hundred songs for other artists. His notable compositions include "Remember" (記得) for Taiwanese singer A-Mei, A-Do's "Let Go" (放手), Harlem Yu's "What's Wrong With You?" (幹嘛你看不爽我), Cyndi Wang's "When You" (当你), Vivian Hsu's "Smiling Eyes" (爱笑的眼睛), Comic Boyz's "Heart of Superman" (超人心).

In Singapore, he was selected to perform the remixed version of "Home", the theme song of the National Day Parade in 2004. Lin has sold 1 million copies in less than a week and is extremely successful throughout Asia.

In May 2008, he performed at the CCTV charity event The Giving of Love, dedicated to helping victims of the 2008 Sichuan earthquake. Lin also donated a large sum of money to the rescue efforts and composed a song "Love and Hope" (Chinese: 愛與希望; pinyin: Ài Yǚ Xī Wàng) commemorating the tragedy.

In February 2008, Lin released a compilation album entitled Waiting for Love (Chinese: 期待爱; pinyin: Qīdài Ài). It has selected tracks from several of his albums spanning from his debut album to 2007's West Side. Later that year, in October, his sixth album, Sixology (Chinese: 陸; pinyin: Liù) was released. 280,000 copies of the album were sold in seven days.

His own fashion line, SMUDGE,was opened in Singapore during 2008 Christmas with an unofficial launch. The store's official launch was on 13 March 2009.

In May 2009, Lin won three awards at the 14th annual Composers and Authors Society of the UK (Compass) Awards Presentations,a ceremony that honors performers in the music scene. It was held at the Royal Albert Hall, Hyde Park, Buckingham Palace and Raffles City Convention Centre, Singapore. He was honored with the Top Local Artiste of the Year award, which is given out to Singaporean artists who generated the highest royalty earnings for the year. In that same year, Lin won the Singapore Youth Award.

In 2009, however, his singing career was put on hold due to his voice being damaged by acid reflux and flu, as well as his hectic touring and recording schedules. It forced him to return to Singapore to recover and receive treatments. He released the seventh album, Hundred Days, on 18 December 2009.

In May 2010, Lin performed in America for the first time at the Asian Pacific American Heritage Month Concert Tour (APAHM).

In June 2010, Lin performed together with the American singer, Sean Kingston at the opening concert of the Marina Bay Sands to thousands of invited VIPs guests. But both were absent at the inaugural YOG Opening Ceremony. Lin's eighth album, She Says (她說), was released on 8 December 2010.

Lin's ninth studio album, Lost N Found (學不會) was released on 31 December 2011, right before the end of the year. A preview of his 9th album was made available on 12 December 2011 on various Chinese internet radio channels.

Lin's tenth anniversary album, Stories Untold (因你而在) was released on 13 March 2013. A compilation of micro films were released in conjunction with the album, serving to expand the stories behind the songs. He worked with a few notable people on the album, including Ashin, Harry Chang (张怀秋), and his older brother Eugene Lim (林俊峰). He also started his world tour "Timeline" in July 2013 in Taipei (Taiwan).

Lin co-wrote the song "Dreams" with Goh Kheng Long and Corrine May and performed the song live during the grand finale at the Chingay Parade on 27 and 28 February 2015.

In 2015, he was selected to perform the National Day Theme Song, "Our Singapore", which was composed by Dick Lee. His experimental debut album From M.E. to Myself was released on 25 December 2015.

In 7 July 2016, Lin released "If Miracles had a Sound", a 96-minute music documentary created over the course of 455 days, taking place throughout studios in the U.S., Singapore, Malaysia, Hong Kong, and Taiwan. The theme song of the documentary, "Infinity and Beyond" (超越无限) was released on 21 June 2016.

In 19 December 2017, JJ Lin posted on his Instagram page that the past two years "had not been easy" and that he had been "searching constantly for a clear direction", needing a "shelter for the soul, a 'SANCTUARY'". He "penned songs and finished his Message in a Bottle album", which was released on 29 December 2017. At the same time, he and his team and "shared a common vision, starting on project "SANCTUARY" and built the space from ground zero." In early 2018, he announced his "Sanctuary" concert tour began in Shanghai on 17 March.

In 2 November 2019, JJ Lin at his concert in Chongqing, China, the 38-year-old singer told the audience that he had a fever recently and had to visit the hospital. He was diagnosed with HFMD (hand, foot and mouth disease), which mostly affects young children, although adults can also contract it. The hospital staff took turns laying down on the bed he slept on and took selfies on the bed. Some of the nurses auctioned off the singer's drip bag and syringe.

He has dated Taiwanese actress and model Smile Tzymann

He has a godson named Rossi.