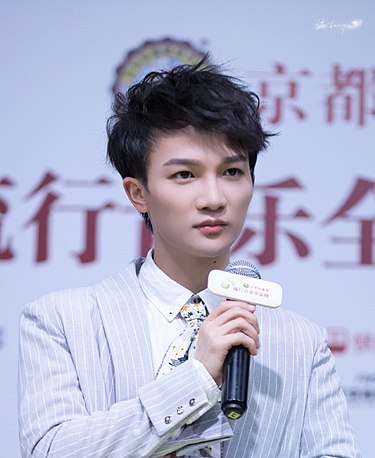 Charlie Zhou Shen (周深) is a Chinese male singer. Zhou is best known for his song Big Fish (大鱼)and The Rose and The Deer (玫瑰与小鹿), and both of which were Top 10 Hits Songs of Fresh Asia Music Award in 2016. In November 2017, Zhou released his debut album《深的深》, a co-creation with producer Gao Xiaosong (高晓松), songwriter Yin Yue (尹约) and composer Qian Lei (钱雷). Zhou won the People’s Choice Male Singer and Most Improved Artist of ERC Chinese Top Ten Award respectively in 2017 and 2018.

He has sang for a few TV series and Chinese Animation (such as Big Fish & Begonia, Dahufa, Crystal Sky Of Yesterday etc.). In March 2018, he has also sang the Chinese Promotional song for the Academy Award for Best Picture of 2017 The Shape of Water. His first series of concerts “深空间” was held on May and June of 2018, then on January, June and July of 2019. His new concert tours "Planet C-929" (C-929星球), start from November 2019, be held in different cities, including Beijing, Nanjing, Shenzhen, Chongqing, Chengdu, Shanghai, Guangzhou, etc. He won the MTV Europe music award for Best Greater China Act in November 2019.

Zhou was born in Hunan, later moved to Guiyang, Guizhou and settled down. With his beautiful voice, he was admitted to the key middle school Guiyang No.6 High School. After graduated from high school, he went to Ukraine to study dentistry. However, he transferred to Lviv National Musical Academy to study Bel canto.

Due to his unique female-like voice, he used to be afraid to sing in front of people. Thanks to one of his upper classmates who invited him to sing his original song Faded after Rain (雨后你不见了), he earned a little fame in school after taking part in a singing contest by chance as well as regained his confidence in singing. Gao Xiaosong said: "Zhou’s voice is ethereal and intangible, like mountain spring that refresh people‘s mind.  Zhou’s unique angelic voice is something of a rarity in Chinese Music."

Career
Before Debut
2010 He started singing online in a Chinese video-based social network, YY.com, using his nickname “卡布叻”.
Participated in The Voice Of China

2014 He participated in The Voice of China (season 3). He got recognition from all coaches by singing HuanYan (Smiling Face, 欢颜) from Chyi Yu (齐豫) in the blind audition. The song Lake Baikal (贝加尔湖畔) sang by Zhou and Li Wei (李维) in the contest was also awarded Song of 2014 of The Voice of China. In the same year, he took part in the live tour of The Voice.

2015 He attended Beijing TV New Year’s Gala (New Year's Eve broadcasts) and supported the bid for Olympic Winter Games in Beijing by singing a multi-lingual version of Let it go. He also took part in the world tour of the performing-arts extravaganza ‘Cultures of China, Festival of Spring. In May, he went to London to attend The Voice UK with Li Wei on behalf of The Voice of China. He then released a cover album ‘Aftertaste’ together with Li Wei in July. After that, his first single The Rose and The Deer was released, and won the Best New Artist of ERC Chinese Top Ten Awards.
Rise to Fame

2016 He sang Big Fish for the Chinese Animation Big Fish & Begonia in May, and Early Rain in Lin-an (临安初雨) for an online game ‘Water Margin Q’ (水浒Q传). Big Fish and The Rose and The Deer, both were selected as the Top 10 Hits Songs of Fresh Asia Music Award 2016. In October, he sang several songs on the music show ‘The Masked Singer’, and impressed a lot of people. He also won the Most Popular Male Singer Online of Music Pioneer Award 2016.

First Concert Tour
2018 He sang the Chinese Promotional song for the Academy Award for Best Picture of 2017 The Shape of Water. He also won the Most Improved Artist of ERC Chinese Top Ten Awards 2018. He held his first series of concerts at Shanghai, Wuhan and Chengdu. He released the promotional song Irrelavant (无关) for another movie ‘A or B’. He won the Most Popular Karaoke MV of China Music Awards and the Best New Artist of Global Chinese Music Chart Awards. His title track Blue Parachute (蓝色降落伞) was also selected as the Top Songs of 2018. In November, he performed some classical songs Time to Say Goodbye, Memory, Think of Me, The Lonely Goatherd in the musical show ‘Super-Vocal’ from Hunan TV and got praised by audience and the coaches. He also appeared in the music show ‘The Masked Singer (Season 3)’ again and performed with his well-trained Bel canto skill. He got applause from everyone and make a name for himself with his wonderful performance on the shows.
Second Concert Tour
2019 He sang With the Wind (随风) for TV series ‘Mystery of Antiques’. A non-official Goodbye Song, named Never Say Goodbye（不说再见）,sang by Liao Changyong and MXH 36 (members of ‘Super-Vocal’) was released in January.  In March, he sang Only You （此生惟你） for the TV series ‘Relying on Heaven to Slaughter Dragons’.  He also got awarded "Breakthrough Artist of the Year" and Blossom won the Top 10 Songs of the Year from ERC Chinese Top Ten Awards 2019. He also started his second series of concerts in Beijing in January, followed by Shenzhen and Hangzhou in June and July. In addition, his music live concert 'in-Music "Shen's Moment" Sharing concert' was also held on 28th March. In April, along with MXH 36 (Super-Vocal 2018 members), he also joined the 'Super-Vocal' and 'Never Say Goodbye' concert tour. He also held a joint music concert “深龄其境” with Isabelle Huang in Shanghai on 18th May. On May 25, he attended Victor Wong's "The Pursuit of Hapiness" concert in Beijing as a special guest. On June 6, he was invited to the award ceremony of the 17th Vision Youth Awards. He received the Campus Popularity Award for Performing Artists on CNR Music Radio Top Music Awards on June 8. On June 12, he attended the Nanyang Khek Community Gift of Warmth Charity Concert 2019, a charity concert in Singapore, to offer warmth to people with autism together with Chyi Yu, Huang Hongying and Roy Li Fei Huei. In the concert, he sang seven of his own singles, and another Hakka song, When Hakkas Meet in Singapore and a duet with Chyi Yu on an English song Mother of Mine. In October 2019, he was on the music industry list of Forbes 30 Under 30 China 2019. On the 1st and 2nd of November 2019, Zhou Shen participated in the Nanjing "The Untamed" music concert and sang the song "Huang Cheng Du (Passing by the Deserted City) （荒城渡）". In November 2019, he won the MTV Europe Music Award for Best Greater China Act. He held his brand new concert tour, namely Planet C-929, in Beijing, Nanjing, Suzhou, Chengdu and Shanghai from November to December 2019.