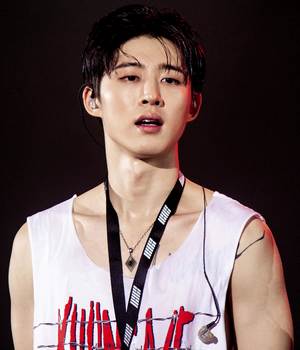 B. I facts:
– He was born in Seoul, South Korea.
– He has a parent and one younger sister which is 15 years younger, named Hanbyul.
– He was a contestant on “Show Me The Money 3”
– B.I hates aegyo and said he wouldn’t do it even if YG asked him to, but he did it anyways for the fans.
– B.I uses movies and books to get inspiration for his songs cause he didn’t experience a lot of things.
– He never had a girlfriend before so he was depending on his imagination to write songs.
– He appeared in Taeyang’s “Ringa Linga” MV
– He appeared in Epik High’s “Born Hater”
– He loves Mickey Mouse and Pringles snack a lot.
– He was a part of Team B on WIN.
– Once in Mix and Match, where he couldn’t take it anymore, he disappeared and then was spotted on a bench at Hangang river, gathering his thoughts while writing lyrics. He said ”I wanted to escape. I wanted to get out of the world.”
– B.I is really nice to animals. (Profile wrote by the members – Arirang TV)
– The members said that he likes boxing as a form of exercise. (Profile wrote by the members – Arirang TV)
– He wrote/composed all their songs and composed Winner’s “Empty”, contributed in Epik High’s “Born Hater”, Blackpink’s “Whistle” and three of PSY’s songs: “Bomb”, “Last Scene” and “Auto Reverse”.
– YG says he is the next G-Dragon
– iKon have moved out of their dorms and now live in 2 seperate houses, each member having their own room.
“Clean members” House: BI, Chan & Song
– He likes going to bowling or playing video games with the other members in his free time. (“Oppa Thinking” ep 9)
– He recently got close with the YG rapper One (Jung Jaewon).
– He is very hard to wake up. Chan called him once 20 times without him waking up. (konic tv)
– Chan said that B.I is the one who suggests to practice early but in the end he’s the one who sleeps in and doesn’t wake up.(konic tv)
– Out of Jay, Bobby and him, he learned dancing first and taught the other two. (“Oppa Thinking” ep 9)
– He joined YG in 2011 (“Oppa Thinking” ep 9)
– June said it’s good that B.I is the leader because he is the only one with leadership skills, but he shouldn’t frown so much because it makes him look scary. (“Oppa Thinking” ep 9)
– He really likes South American culture (“Weekly Idol” ep 306)
– He got three tattoos so far: one on his left chest saying “Nihilism”, one on his right hip bone saying “like father like son, like master like man, for the kingdom of heaven” and one on his shoulder blade of a paper lane being carried by balloons.
– B.I. and Jay were both members of the variety show, ‘Mari and I’.
– B.I is a fan of Red Velvet‘s Seulgi and TWICE‘s Dahyun.
– On June 12, 2019 Dispatch reported that B.I was accused of attempting to illegally purchase drugs in 2016.
– It was related that he wasn’t investigated by police, even if police knew about it.
– On June 12, 2019 YG announced that following the drug scandal, B.I decided to leave the band and terminate his exclusive contract.
– B.I’s ideal type is a pure and innocent girl who owns slender look. Fit well in over sized cardigan and blue jeans with sneakers under slim ankles. He also said that actress Kim Jiwon from “Fight For My Way” fits his ideal type. (“Oppa Thinking” ep 9)