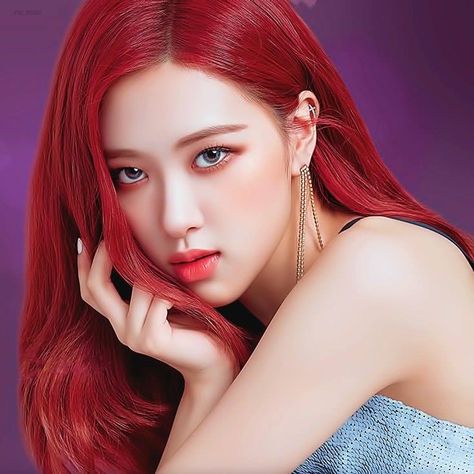 Roseanne Park, better known by her stage name Rosé, is a New Zealand singer currently based in South Korea. Rosé signed with South Korean label YG Entertainment following an audition in 2012, training there for four years. She eventually made her debut as a vocalist in the girl group Blackpink in August 2016.

– She is Korean, but she was born in Auckland, New Zealand (according to Rose during V Line; and according to Rose during Radio star), and raised in Melbourne, Box Hill (Australia), where she attended Canterbury Girls Secondary College.
– She has an older sister, named Alice.
– She moved to Korea back in 2012. (according to Rose during Weekly Idol)
– Rosé placed first in YG auditions in Australia.
– Her Chinese zodiac sign is Ox.
– She trained for 4 years 2 months (2012 May).
– Pre-debut, Rosé used to be a cheerleader in Australia.
– When she was younger, Rosé joined a choir, singing in churches in Australia.
– She’s known for her unique voice and slim waist. Her stylist said that her pants size is 24 (size 0) and she confirmed that her waist is 24 inches (60,96cm) wide.
– Rose is known as “Blackpink’s Goddess”. (Vlive Start Road from Jennie ep 2-3)
– Rose joined the group on May 7th and Lisa’s first thought on her when they met on the elevator was “Oh! I got a special vibe from her! Australia!” (13th of April,2017 on V Live).
– She can speak Korean, English, Japanese.
– She collaborated with G-Dragon for the song ‘Without You’.
– G-Dragon said that he really likes Rosé voice when he did a collaboration with her back in 2012 and said that her voice is really unique.
– She can play the piano.
– Rose also can play the guitar.
– Rose also likes drawing.
– Rosé is left-handed (according to Jisoo during Channel+ Vapp)
– She really likes Kimchi stew.
– Rose loves to eat peppers. (vLive for “As If It’s Your Last”)
– Rose loves Mangoes.
– She hates avocados. She says it’s mushy and weird.
– She hates avocados but owns an avocado plush toy that she got in New York.
– Rosé doesn’t like jokbal.
– Her favorite drinks are healthy drinks.
– Rose is very sensitive, and cries very easily.
– Rosé’s favorite color is blue (vLive 170929)
– Her favorite number is 5 and her favorite equation is 5×3=15.
– Her hobbies are playing guitar and drawing.
– She becomes sleepy when she does nothing.
– She can twist her hands and she can talk even if her mouth is closed.
– She has a habit of biting her fingers when no one is looking at her.
– Rosé has a pet fish called 주황이 (Joo-hwang) which means orange.
– ROSÉ’s role model is Gummy.
– Chaeyoung (Rosé) is close to Twice’s Chaeyoung and Tzuyu, with Red Velvet’s Joy and Yeri.
– Rosé is close friends with Ladies Code‘s Ashley Choi. (According to Ashley on ‘International bnt’ interview)
– Rosé is Christian and goes to church quite often.
– In Weekly Idol, Rosé said that MC Jeong hyeong-don reminds her of her father.
– Seungri said that Rosé reminds him of Taeyang, she has strong vocals and has a lot of soul as an artist.
– Rose collaborated with 10cm, TWICE’s Jihyo and EXO’s Chanyeol in the “SBS Gayo Daejun Acoustic Stage 2016”
– Rosé appeared on the King Of Masked Singer and passed the first round, but unfortunately she couldn’t pass the second round. She was really close, the votes were 50-49 but sadly she couldn’t make it.
– Rosè can spin her hands in 360 degrees. (Knowing Bros)
– She said on last VLive that she has got five ear piercings.
– Rose and Lisa are the first K-Pop girl group members to reach 1 million ‘likes’ on Instagram.