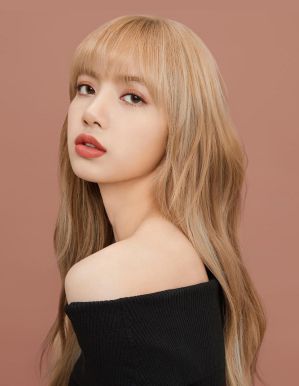 Lalisa Manoban, better known by the mononym Lisa, is a Thai rapper, singer, dancer and model based in South Korea. She is well known as a member of the South Korean girl group Blackpink under YG Entertainment.

– Lisa was born in Bangkok, Thailand.
– Lisa is an only child, according to SBS Cultwo Show (July 6 2017).
– Lisa had a stepfather whose a top certified Swiss chef in Thailand. Her stepfather’s name is Marco Brueschweiler.
– Formerly, her name was Pranpriya and her friends called her by the nickname Pockpack. It was changed to Lalisa after a fortune telling. (Lalisa means the one who is praised.)
– Her Chinese zodiac sign is Ox.
– She’s childhood friends with GOT7′s BamBam as they were both part of the dance crew We Zaa Cool.
– She was the only person accepted to YG in the YG Audition in Thailand 2010.
– She trained for 5 years 3 months (2011 April).
– She became a trainee during middle school and lived in Korea since.
– She can speak Korean, English, Japanese, Thai and basic Chinese.
– According to all members and staff Lisa is the most different onstage vs off stage.
– Members said she’s really playful and mischievous off stage.
– She was voted as the best at aegyo in Blackpink by all members.
– Lisa is referred to as the “Thailand Princess” in her birthplace.
– She appeared in BIG BANG Taeyang’s ‘Ringa Linga’ MV.
– Lisa loves make-up a lot (revealed on Get It Beauty).
– Lisa plays Ukulele.
– She can also play the guitar. (According to Lisa on “LINE TV THAILAND”)
– Lisa is a Buddhist.
– Her favorite food are French fries.
– Her Korean favorite dish is Gamjatang (spicy pork spine soup).
– Lisa’s favorite cuisine is Japanese, and she loves sushi. (Blackpink House ep. 7-3)
– Her favorite drinks are the sweet drinks.
– Her favorite color is yellow.
– Her favorite number is 27 because it her birthday.
– Lisa’s favorite movie is ‘Hachi’ (Vlive Star Road ep. 11)
– Lisa has two cats named Leo and Luca.
– Lisa said that Rose taught her how to play the guitar during trainee days.
– According to Parris Goebel, Lisa is the kind of dancer who isn’t made, but the kind who is naturally blessed.
– Lisa’s new nickname is LaLi Con Artist due to her cheating at board games. (13th of April,2017 on V Live.)
– Lisa loves to sleep.
– She loves photography and taking pictures. She often takes pics of the other members.
– Lisa has been friends with Bambam for 11 years (as of 2017).
– Lisa’s also friends with CLC’s Sorn, NCT’s Ten and (G)I-DLE’s Minnie.
– Lisa is part of the “Thai line”, a group chat consisting of GOT7’s BamBam, CLC’s Sorn and NCT’s Ten.
– Lisa participated in the dance collaboration of the SBS Gayo Daejun 2016 with Shinee’s Taemin, BTS’ Jimin, NCT’s Ten, GOT7’s Yugyeom and Jinyoung, Red Velvet’s Seulgi, DIA’s Eunjin and Oh My Girl’s YooA.
– She wants to participate to the dancing show ‘Hit the Stage’ because she thinks that show is for Main Dancers like her (According from Lisa at Interview in Japan).
– Seungri said that Lisa reminds him of Daesung, she has a bright aura and seems full of energy.
– Lisa and Rose are the first K-Pop girl group members to reach 1 million ‘likes’ on Instagram.
– She acted in NONA9ON CF (2014, 2015, 2016 and 2017).
– Lisa ranked 15th on “The 100 Most Beautiful Faces Of 2017”.
– Lisa is ranked 9th on TC Candler “The 100 Most Beautiful Faces of 2018”.
– Lisa is one of the cast members in the show “Real Men 300”.
– She is the number one most followed K-pop idol on Instagram. (May 2019)