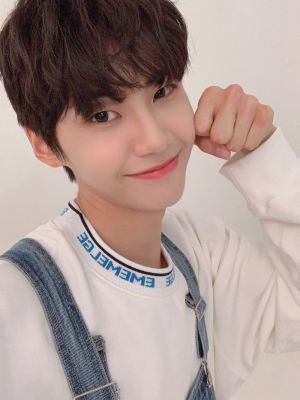 Lee Jin Hyuk 이진혁 is a Korean male singer in South Korea. He is part of a Kpop boy band UP10TION.

Early life & Family
– He legally changed his name to Lee Jin Hyuk (이진혁)(his name was Lee Sung Jun (이성준))
– Birthplace: Hyewong-dong, Seoul, South Korea.
– He has a younger sister.
Personal traits & Skills
– He can speak Japanese and basic English but he is not fluent in English.
– His favorite girl group is Red Velvet.
– His nicknames are Long Legs, Pillar.
– He eats a lot and is not a picky eater. He doesn’t gain weight, no matter how much he eats.
– Although, Jinhyuk can’t eat seafood (because of a bad experience).
– Jinhyuk is scared of ghosts.
– His hobbies include walking around whilst playing games and watching movies.
– He likes playing games such as Overwatch.
– He once dressed up as “Weiopatra”
– Michael Jackson is one of Jinhyuk’s favorite artist.
UP10TION
– Jinhyuk is under Top Media.
– He debuted in 2015 as a member of the group UP10TION, he is the main rapper and a dancer.
– He’s in charge of high rap because ofw his high pitched voice.
– He was the second to last member to join the group.
– Jinhyuk is UP10TION’s game boy.
– He is the tallest among his group members.
– He is roommates with Hwanhee and Bitto.
– Jinhyuk is the cleanest member.
Produce X 101
– Jinhyuk choose to rap and dancing for his position evaluation based on his mom wanting him to show off his dancing skills.
– Lee Dongwook and Jinhyuk became close during the duration of the show.
– During the position evealuation in Episode 7, Dongwook showed his support to Jinhyuk and gave him a couple words of advices going into it with his team.
– Jinhyuk and Jinwoo developed a father son relationship during the show.
– He has become really close with Seungwoo, Byungchan, Kookheon, and Yuvin.
– Lee Jin Hyuk’s intro video.
– All of Jinhyuk’s Produce X 101 videos.
– Jinhyuk placed 14th on the show for his accumulated votes but finished the series out ranking 11th with the votes of that voting period.
Solo Works
– Jinhyuk created an Instagram account.
– Since the end of the show, Jinhyuk changed his stage name Wei to his actual name, Jinhyuk.
– Jinhyuk held his first official fan meet up in Seoul which was sold out. Kim Minkyu and Lee Sejin attended as special guest.
– Jinhyuk would not be participating in the latest comeback with UP10TION to focus on solo opportunities.
– Jinhyuk stated he was not oppose to the formation of BY9 and is willing to do it.
– Jinhyuk has been on varies variety shows and even stated he has received multiple drama roles. He even went on to say that he is willing to take any opportunities that are thrown in his direction.
– Jinhyuk has modeled for Marie Clair, DAZED, Star1 and more.
– Jinhyuk is preparing for his solo debut. Date still not known.
– Jinhyuk will have his solo debut with the album S.O.L in November 4th, with the title “I Like That”
– He will hold his first solo concert on November 4th which will be aired live on Vlive.
– Wei’s ideal type: are cute and short girls who can deal with his love for skin ship.