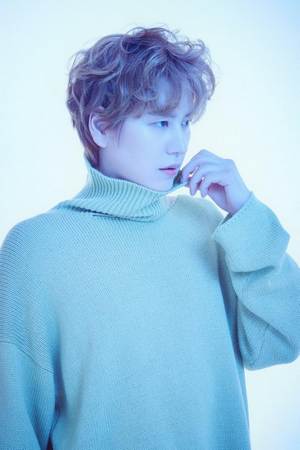 Kyuhyun (규현) is a South Korean singer, television host and member of the group Super Junior under Label SJ a subsidiary company of SM entertainment . He debuted as a soloist on November 13, 2014 with an album single “At Gwanghwamun”.

– He was born in Hagye-dong, Nowon district, Seoul, South Korea.
– Family: Cho Ahra (sister, born 1985), Cho Young-hwan (father), Kim Hanna (mother).
– His father worked as a chairman in an association.
– He is graduated from Kyung hee University in Post-Modern Music. He received his bachelor’s degree in 2013 then he completed his master’s degree in 2016 at the same university.
– When he was 16/17 years, Kyuhyun follow Buddy Star Contest (singing competition) and won 3rd place.
– When he was in college, there was a period when he ate a lot and became pretty chubby, but he went on a diet before debut and then he was as skinny as Hyukjae but after the accident he lost 20 kg!
– He officially debut with Super Junior on May 27, 2006 with a new single “U”.
– In 2006, he released his OST debut for solo track “Smile” for the Korean drama Hyena.
– He likes to play games.
– Kyuhyun was obsessed with the historical the drama. When Jumong movie aired on Korean tv for 10 months by the number of 81 episodes, with  his loyal, he was watching  the drama, do not miss even an episode.
– Kyuhyun had a small scar on his shoulders because once fell down at the age of 7 years.
– Among the members of Super Junior, Kyuhyun said that he was most photographed with Ryeowook.
– Kyuhyun’s favorite food: chopped pork, seafood, and jajangmyeon.
– Kyuhyun really like snow. He is a good skier. So he got the nickname “Skykyu”.
– Kyuhyun had pneumothorax disease, not because of an accident. He was had a pneumothorax disease since college.
– Kyuhyun is very good at playing the clarinet. He played clarinet since 12th grade. He was can also play the piano. In “Boys in the city” Kyuhyun said if he wanted to learn to play the saxophone.
– Kyuhyun has more than 50 nicknames. Because too many, Leeteuk once asked the name of what he likes most among the many nicknames. He says most prefer the name “Gamekyu”.
– In addition to playing games, Kyuhyun also love to read books, but not the comic books.
– He is very good at playing the clarinet. He played clarinet since 12th grade. He can also play the piano.
– He says that when he sleeps, he snores really loudly and he’ll even drool!
– On April 19 2007, Kyuhyun was in an car accident. Leeteuk, Shindong, Eunhyuk, Managers, and Kyuhyun were in the car. Eunhyuk and Shindong’s injuries were not that serious. Leeteuk needed stitches. But Kyuhyun’s state was very serious. It’s said that Kyuhyun was mute for awhile because of the shock. He had only a 30% chance of living.
– In 2008, Kyuhyun joined Super Junior Chinese sub-group Super Junior-M.
– In 2010, he made official debuted for SM the Balled with TraxX’s Jay, Shinee‘s Jonghyun and Jino (Pentagon‘s Jinho). They released their album, Miss You, on November 29, 2010.
– He started to become a host for Radio Star in late 2011.
– In 2015 Kyuhyun participated in KBS’s show “Exciting India”, alongside TVXQ’s Changmin, SHINee’s Minho, CNBLUE’s Jonghyun, INFINITE’s Sunggyu, and EXO’s Suho.
– On August 23, 2016, Kyuhyun underwent vocal cord surgery to treat his vocal chord nodules. He subsequently took a break from all activities during recovery.
– In January 2017, he became a main cast for Variety show for “The Journey To The West”.
– He released his first solo Japanese album called “One Voice” on February 8, 2017.
– In 2017, he made his own youtube channel and uploaded his first video on March 13, 2017.
– Kyuhyun enlisted on May 25, 2017. He received training at the Nonsan Army Training Center for four weeks before fulfilling his military duty as a social service worker. He got discharged on May 7, 2019.
– Following for his military service, he was unable to join One More Chance, Black suit, Lo Siento and One More Time (Otra Vez) promotions.
– Kyuhyun held a fan meeting, Meeting Again Today, on May 19, 2019 at the Peace Hall in Kyung Hee University following his discharge from his mandatory military service.
– He became a cast for “Kang’s Kitchen” travel-reality show with Winner‘s Mino and Block B‘s P.O.
– After he finished his military services, he turned down the offer to return to “Radio Star” as an MC, a source from tvN revealed on May 8 that the Super Junior member ultimately decided to join the cast of “Salty Tour” and the seventh season of “New Journey to the West.”
– On June 2019, He started to become new cast for “Salty Tour: Season 2”.
– Kyuhyun’s ideal type: Short-haired girl, pretty, Christian, long legs and Blackpink’s Jisoo.