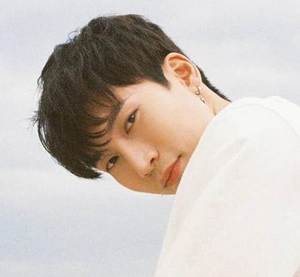 – He was born in Seoul in South Korea.
– He has a younger brother, named Eunchong.
– His favorite color is blue.
– He did a song with Yoo SungEun called “Love Virus”
– He is the “father” of the group.
– He is a picky eater.
– If Eunkwang could trade places with one BTOB member, he would be Sungjae because he wants to breathe the air at 180cm.
– He can play the piano.
– He likes to listen to emotional songs.
– Eunkwang doesn’t sound when he farts. He would pretend like he doesn’t know anything. XD
– His good friend in BTOB is Minhyuk.
– Eunkwang admits that he’s really not quick-witted. He doesn’t know to handle women.
– He went to all-male middle and high school.
– Eunkwang is close to Changsub’s sister.
– Changsub’s sister favorite member in BTOB is Eunkwang.
– Eunkwang is good at cooking egg stew.
– Eunkwang, together with his friend, opened a Korean cafe in Singapore named +82 (Korea’s country code).
– He starred in musicals: “Monte Cristo”, “Bachelor’s Vegetable Store”, “Hamlet”, “Goddess is Watching”, “The Three Musketeers”.
– Eunkwang sang “Dreaming of Spring”, an OST for ‘Mystery of Queen 2’.
– B.A.P‘s Youngjae revealed that he and BTS’s Jin, BTOB’s Eunkwang and VIXX’s Ken are in a gaming crew, called “The Strongest Idol”. (“Lee Guk Joo’s Young Street”)
– Eunkwang joined a tv show, ‘Lipstick Prince’ which premiered on 1st December 2016.
– Eunkwang and Hyunsik were in the “Law of the Jungle” in Mexico.
– If Eunkwang was a girl, he would like to date Hyunsik.
– Eunkwang and his mother Hwang Soon Ok won “Immortal Song: Family Chuseok Special” with their cover of Sunflower’s “With Love”.
– Eunkwang enlisted on August 21st 2018.
– Eunkwang’s ideal type: Someone with a kind heart, goes to church, has double eyelids, medium sized beautiful big eyes, thick lips, small waist, no height limitation, only loves me, long straight hair, and likes it when she puts one side of her hair behind her ears.