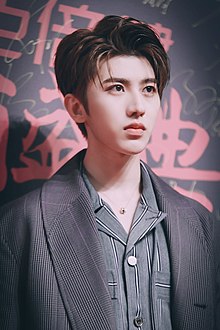 Cai Xukun (蔡徐坤) aka Kun (as giant sea monster), is a Chinese singer, dancer, rapper, songwriter and basketball player. He is active as a solo artist as well as the leader and center of a boy group, Nine Percent. In July 2018, Kun established a personal studio to manage his artist relations. One month later, on August 2, Kun released his first EP titled 1 in China. The EP was a commercial success with every song topping the music charts in China. The first track "Pull Up" broke 7 records on YinYueTai, broke 10 records and peaked at number 1 on four music charts of QQ Music. The music video for "Pull Up", edited by Kun himself, received 10 million likes and over 100 million shares on Weibo. Kun subsequently released another English single called "Wait Wait Wait" on August 23, which quickly dominated music charts in China.

-On January 10, 2019, Kun was officially named China's and Jamaica's Goodwill Ambassador and Outstanding Young Leader by the Jamaican Embassy in Shanghai, China.
-On February 18, Kun released his first Chinese single "No Exception” (没有意外). Two weeks later, Kun announced his first solo tour "Kun One North America/U.K. Tour 2019" in early April.
-He plans to release more songs and host his solo concerts in China later this year.
– Cai Xukun’s nickname is Kunkun.
– His English name was August, but he officially changed his English name to “Kun”.
– His fans are called IKun
– He loves Minions.
– Cai Xukun is afraid of heights.
– Cai Xukun feels very embarrassed and awkward when people tell him or himself to act cute.
– He studied in the United States
– He composes his own songs and rap.
– He did not come on Running Man (Season 6 Ep 11) due to his ongoing law case with his previous company.
– Trainee Period: 2 years 6 months
– He almost debuted with popular Chinese boy band TFBOYS.
– Cai Xukun was chosen to be a trainee with TFBOYS, but his parents felt he was too young and think he should focus on his studies first.
– Xukun participated in Super Idol (星动亚洲) season 1 and finished in the top 15.
– On March 4, 2016, he participated in season 2 and finished among the top 3, joining the program’s debut team
– He’s now suing that company
– He’s the spokesperson for L’Oreal Youth Code
– In March 2014 he was in his first film called “Perfect Wife”
– He played YuFeng in a Tv show called Fairy Tale in 2012.
– He was the main character of “ I Won’t Get Bullied By Girls “ that came out in 2018.
– He is the leader and center of the project group NINE PERCENT and former rapper of SWIN-S
– Cai Xukun also participated in Idol Producer and have ranked 1st with a total of 47,640,887 votes.
– Xukun was the chosen center of “Ei Ei” (“Pick Me” of Idol Producer)
– Cai XuKun shares a room with Wang Ziyi.
– His role models are BTS & Big Bang.
– Motto: “Dreams accompany me when I sleep. If I don’t fulfill them I lose sleep.”
– Xukun is ranked 27th on TC Candler “The 100 Most Handsome Faces of 2018”.Stage Name: Cai XuKun (蔡徐坤)