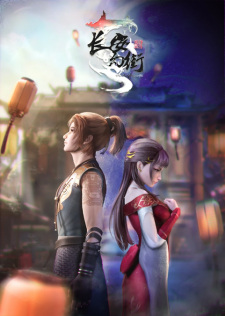 In Zhenguan’s first year, the sects led by Tianxuan, Daxing Fangshu, and aliens held two realms and opposed each other. A few years ago, in Luoling City, there was a road called Chang'an Huan Jie, which inadvertently connected the two worlds due to an abnormal earthquake, to prevent Chang'an and even Luoling City from becoming a battleground between the two worlds. Foreigners living here are doing business in two realms at the same time, while keeping a secret that connects the two realms here. Gu Shaoning, a teenager of the human race, came to Chang'an Magic Street by accident and became acquainted with the alien race people living on this street. At the same time, the young man's original ordinary destiny has also undergone a change that shook the earth due to the unraveling of the secret of Chang'an Fantasy Street. Once the wheel of fortune is opened, it can only encourage the young man to grow and progress, but because of this, he is engaged step by step into the vortex of battle between sects and alien races.