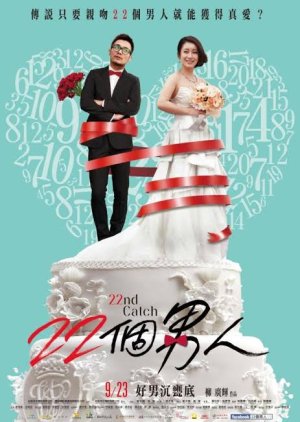 Language
Chinese
Program Type
Movie
Genre
comedy
drama
romance
Shopping channel host Chen Mei Zhi (Hailu Qin) strongly believes in a study that found that a woman on average kisses 22 men before finding the love of her life. She greatly looks forward to marriage, but after getting betrayed by her fiancé, she ends up with no groom, no banquet and no home, just bridal photos. Sealing her bad luck, Mei Zhi accidentally falls into the sea. Fortunately, she gets rescued by her wedding photographer Guang Qing (Van Fan), who temporarily takes her in. With their vastly different personalities, Mei Zhi and Guang Qing bicker constantly, but as the days pass, they become increasingly accustomed to each other's presence. It seems they could just go on living together like this, but the appearance of a wealthy suitor (Chia-Ming Weng) and a girl (Esther Liu) from Guang Qing's past forces them to reassess their relationships.