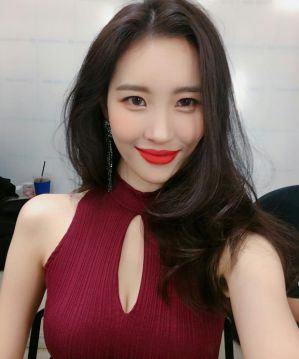 Lee Sun Mi, known mononymously as Sunmi, is a South Korean singer. She debuted in 2007 as a member of South Korean girl group Wonder Girls and left the group in January 2010 to pursue an academic career.

– She was born in Iksan, North Jeolla, South Korea.
– Her family includes her mother, step-father, and two younger brothers.
– She attended Hwangnam Elementary School, Chung Dam Middle School and Chung Dam High School during her childhood.
– She currently attends Dongguk University majoring in musical theater.
– Her nicknames are “Mimi” and “Miya”.
– She can speak English.
– She can play the bass.
– She was a member of Wonder Girls, under JYP Entertainment.
– She left temporarily during her music career in January of 2010 to pursue her academic career.
– She released her solo debut single “24 Hours”, and achieved an all-kill on music charts.
– On June 24, 2015, she re-joined Wonder Girls.
– She received songwriting and producing credits for several Wonder Girls releases.
– After Wonder Girls disbanded, it was announced that she had left JYPE and had signed with MakeUs Entertainment on March 14, 2017.
– On August 22, 2017 she released the single “Gashina”, which was a huge success.
– Her favorite color is purple.
– Her favorite artist is Drake.
– Her favorite actor is Robert Downey Jr.
– Sunmi’s legs are 110 cm. (Weekly Idol)