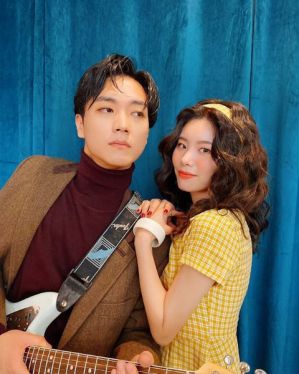 Chimmi was in the SoundK studio for You Who Came from the Stars with DJ Ashley. Chimmi (취미) is a co-ed group that debuted in 2018 under NUPlay.

Tidbits::
– MHL was born in Korea but raised in Australia. He came back to Korea about 5 years ago.
– Hyojung started writing songs in high school.
– MHL’s English name is Peter.
– Hyojung wrote a song for an OST competition and won.
– Peter gets inspiration from movie and visual things.
– Hyojung songs are most inspired by love, heartbreak, and things on the street.
– Peter would like to write a heavy metal rock song for Hyojung because it’s something she has not tried before. He thinks it would be a stress relief.
– They listen to a lot of Charlie Puth. Peter also listen to John Mayer, and Shawn Mendes lately. Hyojung listens to a lot of kpop girl groups.
– Peter admits to just doing what Hyojung tells him to do. DJ Ashley said he is the older brother whipped by his little sister).
– Runaway is from their first album.
– Hyojung uses a lot of products to maintain her skin.
– Peter still has a Winnie the Pooh blanket from when he was in 2nd grade. He still sleeps with it.
– Hyojung has always wanted to be an idol from a young age, and she likes dancing.
– Peter was famous for falling asleep in every class in high school, but he still graduated on time.
– Hyojung remembers fangirling so hard for TVXQ. Peter likes older songs and still has all his Seo Taiji albums.
– Peter used to have long hair (longer than DJ Ashley but not as long as Hyojung), because he couldn’t be bothered to cut his hair.
– Hyojung teaches piano, and she used to work as a parking lot attendant.