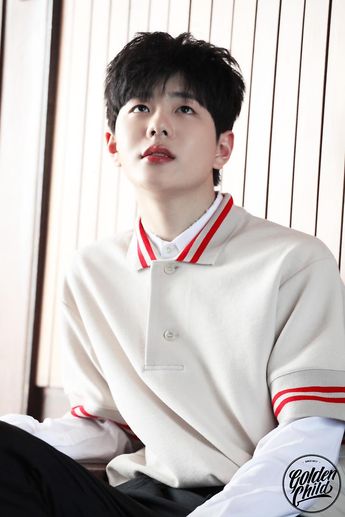 Choi Bo-min, better known by the mononym Bomin (보민), is a South Korean singer, actor and host. He is a member of Woollim Entertainment’s Golden Child. He is best known for his lead role in A-TEEN 2.

-He was born in Gyeongi, Yongin, South Korea
-He used to go to Seocheon High School but now goes to Hanlim Multi Art High School
-His nicknames are ‘장난꾸러기 (jangnankkurogi)’ meaning ‘Fools Around’ because he likes to copy his members’ funny gesture & he tricks his members a lot, and 실세 막내 (silse maknae) meaning ‘Big Shot Youngest’. Not because he looks down at his members but because his members always let him do anything he wants
-The reason his jersey number is 89 is because if you substrate 11, the number of members, from 100 it equals 89
-Bomin became a Woollim trainee since August 28, 2015 (exact 2 years before his debut).
-Bomin’s favorite animal is a cat.
-Bomin has acrophobia. (Golden Child Woollim Pick episode 3)
-Jangjun makes Bomin laugh the most.
-Bomin is usually always the last member to get up.
-Bomin wants to resemble Y because Y is really good at sports and he’s full of charisma.
-If he’s given a chance to pick one of the members as his real brother, he’d chose Daeyeol.
-His jersey number 89 represents the fans [100-11 (Golden Child members) = 89 (the fans)]
-Bomin is The Luckiest Member (Woolimpick ep 8)
-He’s close to The Boyz‘ Hwall, Sunwoo and Eric, NCT‘s Jeno and ASTRO‘s Yoon Sanha, AB6IX‘ Daehwi, Stray Kids‘s Hyunjin and Seventeen Joshua.
-Bomin appeared in Lovelyz “Now, We” music video
-Bomim got cast on the 2nd season of “A-Teen” as the new transfer student Ryu Joo Ha.
-He acted in the kdrama “Melting Me Softly“ (2019).
-Bomin is the MC for KBS MUSIC BANK alongside with Shin Ye Eun his co-star in A-TEEN 2.

Choi Bo-min, better known by the mononym Bomin (보민), is a South Korean singer, actor and host. He is a member of Woollim Entertainment’s Golden Child. He is best known for his lead role in A-TEEN 2.