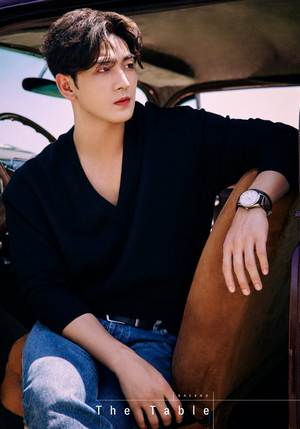 -His nicknames are Eye-smile Prince, Sexy Bandit, and Aewol Prince.
-He is from Aewol, Jeju Island, South Korea.
-He did kumdo for seven years.
-His specialties are fencing, writing lyrics, and composing.
-Baekho writes most of Nu’est and Nu’est W’s songs, along with his close friend Bumzu.
-He is afraid of traveling alone on the subway. During trainee days, JR would take the subway with him.
-His stage name means White Tiger. After School’s Uee gave it to him before their debut because Kang Baekho is a character from an anime and Uee thought Baekho resembled him.
-He has/had pet fish.
-He was Pristin’s vocal director for their debut album.
-Baekho wrote lyrics for Fromis_9’s DKDK and Produce 48’s We Together under the pen name Bbaekkom (빼꼼).
-He is awkward when doing aegyo.
-His role models are TVXQ.
-He was on Produce 101 (ranked 13th).
-He’s friends with Wanna One’s Lai Guanlin from their time on Produce 101.
-His fans are called Donghohwes.
-He’s very messy in the dorm.
-His Spoonz character is Diabol.
-His representative animal is a tiger.
Baekho’s ideal type: A girl who cooks well and has a lot of aegyo.