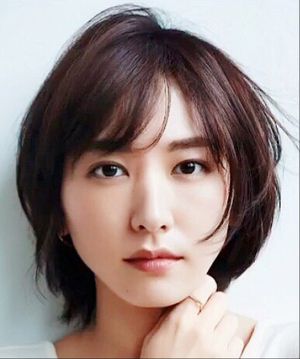 Aragaki Yui is a Japanese idol, model, actress, singer, seiyu and occasional radio show host of Ryukyuan ancestry.
She is particularly recognized for her pleasant face and her movie projects.
Aragaki's career started when her sister volunteered to turn in an audition profile for her after being informed that the junior fashion magazine nicola is looking for a new face. Aragaki won the Grand Prix and officially became an exclusive model for the magazine or a nicomo. In 2001, her fellow nicomo Ayako Enamoto nicknamed her Gakky.
Aragaki expanded her modeling career into gravure in 2004. She also appeared on variety shows and commercials, her commercials for Pocky being the most popular. A year later, she officially graduated from the magazine and subsequently acted in the TBS drama, Dragon Zakura alongside fellow Japanese idol, Tomohisa Yamashita and actress Masami Nagasawa, marking her breakthrough in show business. Since then, Aragaki has been cast in various dramas like Gal Circle and My Boss, My Hero. Despite graduating from 'nicola', she still appears in the magazine occasionally. She currently holds the record for appearing the most number of times as its cover girl.
In 2007, she starred in Waruboro with Shota Matsuda and Yuu Shirota. Afterwards she was cast alongside Hiroshi Tachi and Shigeaki Kato in the TBS' summer drama, Papa to Musume no Nanokakan where Aragaki plays a high school student who exchanges bodies with her father, a middle-aged salaryman.
Aragaki was also cast in the movie Koisuru Madori (Tokyo Serendipity), with Ryuhei Matsuda. Later that year she appeared in the tragic drama Koizora with Haruma Miura which won Aragaki her first acting award.
Outside acting she also released her first album, Sora, and the single heavenly days, a song from Koizora.
In 2007 she starred in three films and a drama, and recorded a debut album. But she became ill from work related stress.
To date, Aragaki has won five Newcomer awards for the movies Waruboro, Tokyo Serendipity and Koizora/Sky of Love. Her fifth award was in honor of her role in the ¥3.6 billion-grossing movie, Sky of Love.
Memories, the theme song for Tokyo Serendipity, was included in her debut album. She also performed her at Budokan.
She also released two singles in 2008, Make my day and Akai Ito. Make my Day was used in the NHK drama Hachi-One Driver, while Akai Ito is a cover of a song written and performed by Kobukuro during their indie days, in commemoration of the duo's tenth anniversary in the Japanese music industry.
In August 2008 Aragaki' played intern Megumi Shiraishi in the medical drama Code Blue: Doctor Heli Kinkyuu Kyuumei, with Tomohisa Yamashita and Erika Toda. At the same time she made the movie Fure Fure Shojo.
She also appeared in Ballad, with Tsuyoshi Kusanagi, as a feudal princess. She released her fifth single PIECE in February 2009.
Aragaki also hosts GIRLS LOCKS!, part of the Japanese radio program, SCHOOL OF LOCKS!, together with other U-20 idols Maki Horikita, Chiaki Kuriyama and Nana Eikura. She also works as a voice actor.