The Examination For Everyone 大考 Episode 2 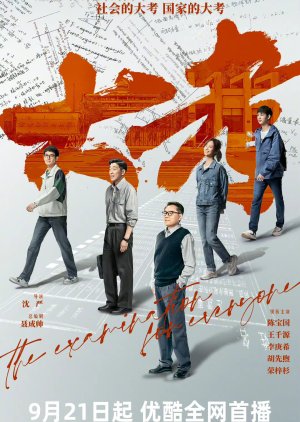 The new virus was discovered in the school, which made everyone very worried. In order not to panic, the school calmed the hearts of the students. And some parents of students also felt very scared, worried that it was like SARS in 2003, especially Tian Wenwen's parents, thinking about going home for reunion during the Chinese New Year.

Pan Xiaoxuan was also very angry when he saw his father. He felt that they had always ignored him and paid him money. When I went back, I saw that Gao Mingyu had also packed up and was going home, so he gave him his mobile phone for easy contact in the future, but Gao Mingyu didn't want to accept it. This made Pan Xiaoxuan feel that it was useless to keep it and threw it into the trash can. This made Gao Mingyu feel It is a pity.

Wang Benzhong's daughter Wang Qian was very angry when she learned that her boyfriend Yang Ran was going to volunteer in the epidemic area. After returning home, he was always depressed. This made Wang Benzhong very anxious. He didn't expect Wang Qian to be irrelevant to nurses, and just didn't want to die for others like his mother did. Wang Benzhong felt that his mother worked very hard at the beginning, and he blamed him for encouraging her too much, so he died on the way to fight against SARS, so he also hoped that his daughter would not do anything as long as she liked it.

Zhou Bowen felt that the family should buy more masks. Mom wanted to go out, but Zhou Bowen just wanted to tell Dad to go out, but Dad was very upset. Now his game account has been stolen and he is recovering it. Unexpectedly, Zhou Bowen told Dad that the account has been hacked. He sold it, which made his father very angry, but Zhou Bowen told him that he would go out to work in the future, and he could not play games. He saw his father playing games since he remembered, so he could not treat his mother like that.

Dad had no choice but to go out and buy the mask back, but he still wanted Zhou Bowen to get his account back, but the son told him that he had no choice, and the father was helpless.

Tian Wenwen's family drove home to reunite with their daughter, but many checkpoints stopped along the way, and the family was worried about whether they would be stuck on the road. As a result, the father wanted to buy lipstick for Tian Wenwen, but the mother forgot it, and the two quarreled on the road.

Qin Jianguo held a meeting for all school principals because of the epidemic. As long as anyone who has returned from other places should report to his superiors as soon as possible, this year's end of the year is not easy, so everyone should be prepared in advance.

Tian Wenwen's family had a problem with the expressway. They were always shooting guns. They scared their mother and told their father to rush to the service station to fix it. As a result, they thought it must be the wrong fuel, so they had to fix it for him, but they learned that they had returned from Wuhan. I was scared and told them to repair in a few days, because the workers were scared away due to the epidemic.

Tian Wenwen's mother went home in the bus, leaving her father to repair the car in the service area. After that, she called Tian Wenwen. During the call, Tian Wenwen also took her temperature. She found that she had a high fever and hung up the phone. The phone said it.

Tian Wenwen's mother was called out of the car when the police found out that she was returning from Wuhan. Originally, her mother did not want to admit it, but her youngest daughter was straightforward. It turned out that the policeman happened to be Wu Jiajun's father, and told them to go back to quarantine for 14 days in a special car, and then the situation would be determined. Mom called Tian Wenwen and told her and her sister that they were going to be quarantined, so they went to a new house and told Tian Wenwen to take care of herself.

Li Xiaoxu felt that Tian Wenwen had no contact with the outside world, it should be a simple cold, so she went to take care of Tian Wenwen's body temperature for a day, and learned that Tian Wenwen lived alone and had to stay with her, which made Tian Wenwen very moved to tears.