No Regrets in Life 爱情发生在三天后 Episode 3 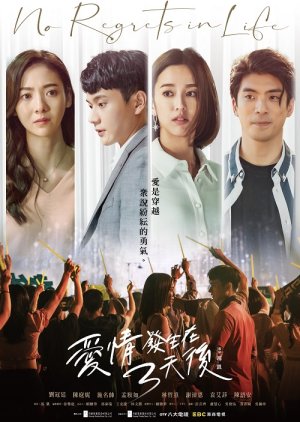 Liang Xinzhen said that all the adhesive strips produced by this factory were faulty, and the masks were swollen. Liang Xin really angrily scolded Wang Yan. Unexpectedly, Wang Yan discovered her mistake. She checked the error report. Here are new products from new manufacturers. Liang Xinzhen slapped the document on the table and left aggressively. Wang Yan chased after her and hoped that she would calm down, but the war between the two was about to break out.

The video hit rate exceeded 300,000, and the friends were very excited, but Ning Youzhu was very depressed, and even more angry when he thought about what happened eight years ago. Ning Youzhu was made into various expression packs, and friends were also talking about Wang Yan, and they said that he was much better than Bi Jiada. But Ning Youzhu doesn't think so, she will never eat grass. The clerk gave Ning Youzhu a cake that she hadn't ordered, and said that if she could come to the store in the future, she only needed to bring the store's logo. Now Ning Youzhu has many fans, but she is getting more and more depressed.

Two hours later, Ning Youzhu's live video was scolded by netizens, thinking that she just wanted to be popular and hyped. Hong Dafang and others specially came to pick her up from get off work, and Ning Youzhu complained depressed and embarrassed. Everyone has never seen Bi Jiada, so they don't like him much, let alone compare him on the same comparison line of Wang Yan. Everyone persuaded Ning Youzhu to tell Wang Yan clearly, after all, he was really a good person, but Ning Youzhu was still reluctant to go and left silently.

Ning Youzhu was silently distressed, but he didn't expect to fall in the same place eight years later. After returning home, Ning Youzhu saw Bi Jiada waiting outside because he could not find the key. Bi Jiada is a theater actor, but he was very aggrieved at this time because he failed the audition. Ning Youzhu encouraged him to be a very capable actor and hoped that he would not give up so easily. Ning Youzhu tried to see if Bi Jiada had seen his own video, but Bi Jiada said that he hadn't seen any video in the past few days, and Ning Youzhu breathed a sigh of relief.

Ning Youzhu has been taking care of Bi Jiada, but before Wang Yan was the one who needed to be taken care of. Ning Youzhu's thoughts drifted into the distance, unknowingly feeling a little sad. Pulling away from his memories, Ning Youzhu continued to comfort Bi Jiada. The wound of Wang Yan's bite by Ning Youzhu has not healed yet. Liang Xinzhen called. Now that the whole world knows that he has a girlfriend outside, Liang Xinzhen is really embarrassed. Wang Yan hurried home to explain, but just said that what they saw was the whole thing, they just hadn't seen for eight years and wanted to figure out something. However, Liang Xinzhen smiled sarcastically and took out what Wang Yan had hidden. The two had a big fight again because of this matter. Wang Yan thought that Liang Xinzhen had violated his privacy, but Liang Xinzhen always thought that he was unqualified and filed for divorce again. Wang Yan signed the divorce agreement in a fit of anger, slapped it on the table, and went back to the study to pack up. The past came to mind.

Wang Yan was called out by Hot Shou and Hong Dafang for a lecture. Everyone didn't understand the events of the first three days. Hong Dafang held injustice for Ning Youzhu, but Wang Yan just felt so tired and didn't want to say a word. Wang Yan posted an apology video on the Internet, announcing his name and the original misunderstanding. It doesn't matter who hurt who, but Ning Youzhu is a kind person. Wang Yan hopes that Ning Youzhu will not be hurt again. . Ning Youzhu sighed deeply when she saw this video. Wang Yan has always been someone who doesn't love her, and there's nothing wrong with not loving her. Netizens were not easy to deal with, and public opinion once again showed a one-sided attitude towards Wang Yan.