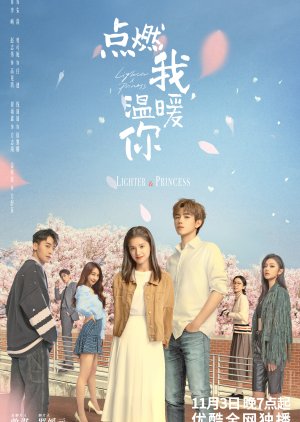 When Tian Xiuzhu saw Li Yi coming, he went out with interest, leaving room for the two of them to talk alone. Zhu Yun cared about and asked about Li Yi's current situation, but Li Yi's face was cold and his words were even colder. Being together has nothing to do with him anymore, everything between them is over. After speaking, Li Wei left, leaving behind Zhu Yun who was sad alone.

In fact, although Li Wei said the most ruthless words, he didn't really put Zhu Yun down in his heart. After returning, he kept recalling the past that happened to them, and thinking about the past that could not be returned was very sad. Tian Xiuzhu persuaded Zhu Yun to go to Li Jiao, and knew that Zhu Yun’s heart was all about Li Jiao, but Zhu Yun said that he had thought about it carefully, Tian Xiuzhu was much better than Li Jiao, and Li Jiao was often true It's a bastard, and it's a good ending now that it's over.

Li Wei asked Xiao Liuzi to accompany him to rent a house. Li Wei also told the landlord that he had been in prison. Many landlords did not want to cause trouble and refused to rent a house to Li Wei when they heard this. Xiao Liuzi told Li Yi not to mess around. , otherwise no one would rent a house to them. After thinking about it, Li Yisi also felt that what Xiao Liuzi said was reasonable, so he simply concealed the matter of imprisonment, and the house was successfully rented.

Li Yi walked past the places he and Zhu Yun walked together before, and he couldn't help but recall the time when they were together with a lot of emotion, and Zhu Yun was the same. Although he said that Li Yi was a jerk, he was all about Li Yi in his mind. figure. Unknowingly, Li Yi walked to the rental house where he used to be with Zhu Yun. Zhu Yun also went when Li Yi sat in a daze and remembered, but the two still missed it. Zhu Yun saw on the door lock that he used to be with Li. A keychain from when we went to school together.

At that time, Zhu Yun had just entered school, and everyone rushed to the school in a hurry, only Li Yi was late. As a result, when the teacher called the name, the first name was Li Yi, but he did not appear for a long time. After many roll calls, Li Yi walked in recklessly. The classmates felt that Li Yi was too much.

Afterwards, Fang Shumiao and Zhu Yun went to the cafeteria to eat. At this moment, Fang Shumiao took a call and left temporarily. Unexpectedly, Li Wei sat down when there was an empty seat. Zhu Yun was surprised and quickly told Li Yi that the seat was Fang Shu. Miao's, but Li Wei didn't speak, just at this moment Fang Shumiao went back and was embarrassed to see Zhu Yun sitting at someone else's table and eating, and told Zhu Yun that her meal was at the next table, so it wasn't Li Wei who was sitting It was in the wrong place, but Zhu Yun was sitting in the wrong place, and Zhu Yun was eating half of the meal that Li Yi ate. Zhu Yun felt extremely embarrassed.

Li Wei and Gao Jianhong were assigned to a dormitory, because Gao Jianhong's parents went to see him at school, Gao Jianhong begged Li Wei to give the room card of 312 to his friend. Unexpectedly, that person turned out to be Zhu Yun, and the two met again. The sisters in the dormitory teased that Zhu Yun was lucky.

The next day in class, I happened to meet Li Jiao. The teacher directly announced in class that Li Jiao was the No. 1 physics student in their provincial college entrance examination. It was the first time that the classmates looked at this rebellious Li Jiao with admiration.

Fang Shumiao was selected by the teacher as the monitor. After that, Li Wei often did not go to the morning self-study in class, so Fang Shumiao sent a message to Li Wei to inform him to go to class, but Li Wei was dismissive of those rigid things. Fang Shu Miao was very angry because of this, and in order to complete the task, she took Zhu Yun to do work for Li Yi together. As long as Li Yi went to study for themselves in the morning, their task would be completed.