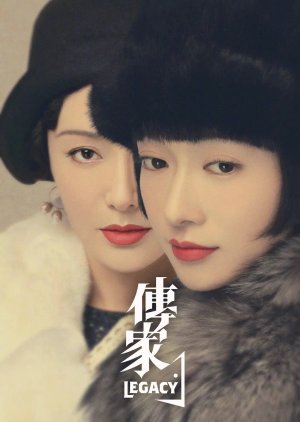 Zhong Xiu judged that the second sister told the eldest sister what happened at night. Zhong Yu pointed out that Zhong Xiuming knew that Yi Jiyu was trying to sow discord, but he couldn't tolerate any flaws in the eldest sister who had always been respected. With tears in her eyes, Zhong Xiu said that she called Xinghua today and knew that the second sister had one more vote than the eldest. Zhong Ling said the decision was in Zhong Yu's hands. Zhong Yu said that she wanted to take back the former house and Xinghua Department Store because they had special meaning to her, but now her father forced her to exchange her life's happiness, and she would not agree. She loved Tang Fengwu and was willing to give it up for him. Everything, follow him to the ends of the earth, Tang Fengwu heard these words outside the door, moved in and criticized Zhong Xiu for being rude to the second sister. Zhong Xiu reminded him that he was just an outsider, and Tang Fengwu said that he is now Zhong Yu's proposal. , He gently took Zhong Yu's hand and went out.

Zhong Xiu admired how the eldest sister made Zhong Yu willing, and Zhong Ling told her that when she really fell in love with someone, she would know the reason. After Zhong Ling went upstairs, Huang Yingru reminded her daughter: she was the one who brought Luo Rumei to the public, and Zhong Yu was the one who fell in love with Tang Fengwu and willingly gave up Xinghua. Zhong Ling did nothing from the beginning to the end, and Zhong Xiu could not go out even if she lost. Losing her demeanor in front of people, Zhong Xiu cried aggrieved and threw herself into her mother's arms.

In the yard, Tang Fengwu knelt down on one knee with a diamond ring and formally proposed to Zhong Yu. He sincerely said that the ring was left to him by his mother when he left, and asked him to put it on the hands of his future wife.

Zhong Ling was worried that Xi Weian would look down on her because of his background. Xi Weian sincerely apologized to Zhong Ling and swore that there would be no next time. Zhong Ling cried and threw himself into Xi Weian’s arms. Holding Xi Wei'an in tears. In the evening, Xi Weian learned that Zhao Haiting had robbed all the smoke and soil, and was angry that he had crossed the line this time.

On the other side, Shen Bin found out that Changlong's behind-the-scenes boss was Wang Jianchi, so he handed him a certificate of submission with this batch of tobacco soil. It turned out that Shen Bin had let out the wind and said that Zhao Haiting was going to rob the batch of tobacco soil. After Zhao Haiting, Wang Jianchi admired Shen Bin's good tactics and readily brought him under his command.

Tang Fengwu waited for Zhong Yu in the car and persuaded her to say goodbye to her father, but the stubborn Zhong Yu refused to compromise. Aunt Gu told the master to take away all of Zhong Yu's things, and not one piece was allowed to remain. Zhong Yu could see that Aunt Gu was also angry with her. Zhong Yu instructed Zhong Jie to hand over A Yuan's bonus to her. She had already explained to her eldest sister that she would ask A Yuan to advertise for Xinghua in the future as Miss Shanghai, and pay her salary on an annual basis. Under the persuasion of her mother, Zhong Xiu reluctantly went to the door to see Zhong Yu. Zhong Yu said goodbye to her siblings one by one. After she left, Luo Rumei sat in the car and watched Zhong Ling from a distance.

Zhong Xiu asked the eldest sister, just now the second sister told her that even if she did not tell her in advance, the eldest sister knew everything. What does this mean? Huang Yingru explained that there were three possibilities. The Yi family had nothing to hide from Zhong Ling. The reporter sent a photo to get Zhong Ling's attention, or she began to fortify since Luo Rumei appeared, and even Luo Rumei appeared at the venue as bait, Zhong Ling. Jade's tipping off is just a favor. Zhong Xiu reminded Zhong Yu that she really thought that Zhong Yu was ignorant of everything she did and was at her mercy? Don't forget that her second sister is already the mansion's wife! Zhong Yu was angry that her sisters teamed up to pit him, and stomped into the yard. Huang Yingru sighed that Zhong Xiu's tricks were too immature, and Zhong Ling pointed out that she knew all the truth but kept silent, was it to let Zhong Xiu see everyone in the Yi family, and Zhong Yu and herself had experienced hardships in the Yi family, Only Zhong Xiu didn't, so Huang Yingru hoped that she and Zhong Yu would be her sharpening stones. Zhong Xiu was really pitiful, and even her biological mother was plotting against her. Huang Yingru is ashamed that the current Zhong Xiu is far inferior to her two older sisters, and the future is unknown. She has asked her daughter to them.

The people around her persuaded Luo Rumei to speak to the eldest lady since she was here. Luo Rumei sighed that as long as her daughter lived well, she would be happy even if she never saw her in this life. Zhong Ling turned around at the entrance of the Yi Mansion and saw Luo Rumei hurried away in a rickshaw. Shen Bin on the other side saw Zhong Yu sitting in Tang Fengwu's car on the street, and his heart was mixed.

Yi Xinghua told Huang Yingru that he knew Zhong Yu better than anyone else. She did not marry Tang Fengwu because she wanted to be a minister’s wife, but she would give up Xinghua and the mansion because she truly loved him, and would try to get the other party to propose marriage. Seeing her win is very beautiful, but the two have completely different personalities and interests. Zhong Yu is suspicious by nature and is domineering in her bones. She is willing to make sacrifices for Tang Fengwu, and she will definitely ask for double the return. What Tang Fengwu needs is a good wife. He didn't have time to think about women, but he wanted to see who would surrender to the other. Yi Xinghua sighed with emotion that Zhong Ling would be the general manager of Xinghua tomorrow, and Huang Yingru suddenly asked him if he had thought about letting Zhong Xiu grow up and become Zhong Ling's arm in the future.

The next day, Zhong Ling went to the department store to see Zhong Xiu helping the clerk sell goods, and was also working diligently to study overtime after work.

One day, Zhong Jie went to Xinghua to pick up Ayuan for dinner after get off work. During the dinner, someone recognized Ayuan and invited her to drink and take a photo. Ayuan was at a loss, and Zhong Jie quickly stepped forward to help her. Suddenly there was a commotion outside. After they went out, they saw patriotic students marching at the entrance of Xinghua Department Store. Lu Pei forcibly pulled Liu Qingfen out of the parade, and Shen Bin from Changlong Department Store opposite announced in public that all Japanese goods in the warehouse would be destroyed in public. , and Changlong Department Store will never sell a single Japanese product in the future. Seeing his proud look, Zhong Xiu is angry that Xinghua is the one who never sells Japanese products, but Changlong's show steals the limelight. It seems that the second sister is right, Shen Bin is too scheming.

On the evening of January 28, 1932, the Japanese invaders attacked Shanghai, and the war between China and Japan began on January 28. Before Xi Wei'an went out, Zhong Ling heard that the Japanese invaders had increased their troops and was worried about Xi Wei'an's safety. After going out of the room, Adjutant Lu reported that they had sent emergency calls six times, but the reinforcements had not been seen for a long time. If this continued, they would be surrounded by the enemy. Yi Xinghua in the study also issued an announcement calling on Shanghai businessmen to donate money and materials to go to the national disaster.

The Songhu War of Resistance lasted for thirty-six days on 128. The Chinese soldiers sacrificed their lives and fought bravely against the enemy, forcing the Japanese army to change its command three times. On March 1, Japanese reinforcements attacked Liuhe, and the Chinese army was forced to retreat. On March 3 In Japan, the Japanese army declared a truce under the mediation of the League of Nations. After the war, Shanghai Zhabei was reduced to a piece of scorched earth, and industry and commerce suffered a devastating blow.

Zhong Ling went upstairs dejectedly after seeing Xi Wei'an entering the door, knowing that the negotiation was not going well. Adjutant Lv told her that the negotiation had not progressed, and the Nanjing side was going to submit the matter to the League of Nations. Zhong Ling's anger at the Chinese had to be handled by foreigners. No wonder Xi Wei'an was unhappy. Adjutant Lu told the officers and soldiers that there were no soldiers or clothing, and that they did not back down when they were desperately defending the city, but when they were forced to retreat, the soldiers felt very sad, and Commander Xi felt sorry for the people who had given all his support.

Back in the room, Zhong Ling hugged Xi Weian tenderly, comforting him that he had done his best. Betraying the interests of the country and the nation and turning Shanghai into an undefended city, Zhong Ling felt that the war was about to end, and Xi Wei'an told her: This is just the beginning, and the days when the Japanese invaders will fight to the death with them will not be too far away.