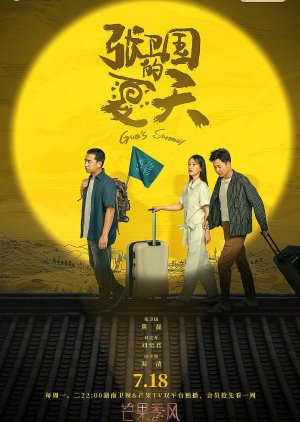 Gu Jiayi was uneasy because of Lin Hongnian's strange message before, and hurriedly called Zhang Weiguo to ask him about Lin Hongnian's whereabouts. Although Zhang Weiguo seemed indifferent on the surface, after hanging up the phone, he could not help but think of his brother, especially when he heard the voice message left by the other party, he felt very uncomfortable.

On the other hand, Gu Jiayi hurriedly flew to Nanjing to look for Lin Hongnian. While inquiring by the lake to see if someone committed suicide, she also reported the case to the police station. She was a little relieved until she heard that someone had discouraged the man who cast the lake from committing suicide. Sure enough, when he returned home, he saw Lin Hongnian, and now Lin Hongnian had figured it out a lot, so he returned the key to Gu Jiayi.

The father-in-law Zhang Dache recovered and was discharged from the hospital. Zhang Weiguo personally accompanied him to go fishing by the river. When he mentioned the recent events, he would inevitably feel emotional. Before his father Zhang Chunquan passed away, Zhang Weiguo always felt that he was very happy. There was a courtyard house in the Second Ring Road, a porcelain horse worth 200 million yuan, a son who studied at Qing University, and a stable job.

However, I thought that the days would continue to be leisurely and leisurely. How could I know that with the arrival of summer, the father died suddenly, the son became a high school repeater, the porcelain horse became a fake, and the proud thing gradually disappeared, like clothes Pieces peeled off one by one, and in the end only a pair of pants remained, standing naked and being criticized. Zhang Dache has experienced life and death to see through all the flavors of life, and enlightened Zhang Weiguo to change his thinking in everything, to implement what he wants to do as soon as possible, and don't wait until he loses and regrets it.

Lin Hongnian canceled his company in Beijing and decided to stay in Nanjing for development in the future. Not only that, but he returned to the original company, but because he offended Mr. Tian, ​​he sat on the bench all afternoon. Since President Tian refused to meet, Lin Hongnian had no other choice but to take the initiative to send text messages to the other party. He apologized for the bad influence he had caused, and hoped that President Tian would give him a chance to start over.

Zhang Weiguo sat and chatted with the tenants of the small courtyard, thinking about future livelihood issues, and finally decided to open a fried sauce noodle restaurant based on everyone's suggestions. And it happened that there was an idle room in the yard, and other people also invested in shares in various ways. Zhang Weiguo was encouraged and immediately began to gather.

Not long after, Tongtianxi Fried Sauce Noodle Restaurant opened, and brothers and sisters from the Peking Opera Theatre came to cheer. Zhang Weiguo used tea instead of wine to express his gratitude and talked about the reason why he was named "Tongtianxi". In those days, Zhang Weiguo broke his waist while participating in a report performance, and the play he sang was Tongtian Rhinoceros. Later, every time he heard these three words in his midnight dream, he was still brooding, and now he gets up wherever he wants to fall. .

Amidst everyone's applause, Zhang Weiguo appeared in a short scene, as if he was returning to the stage. Unfortunately, Lin Hongnian was not there. Senior brother Dabao told Zhang Weiguo that Lin Hongnian had returned to Nanjing, and now he was working as an assistant to his former assistant, and his life situation was really difficult, so Zhang Weiguo was free to call back.

Gu Jiayi trusted her mother at home, and understood that the other party always expected her to rebuild her family with Wen Zhiyuan, but Zhou Xiaoqiu didn't understand her true thoughts at all. For so many years, Zhou Xiaoqiu has always regarded her as a child, and everything has to be intervened in arrangements. Zhou Xiaoqiu reflected on his own problems, and the mother and daughter finally spoke up completely.

Since Gu Lin no longer studies painting, Gu Jiayi has no meaning to stay in Beijing, so she plans to quit her job and return to Nanjing. Before leaving, she said goodbye to Wen Zhiyuan and thanked him for taking care of herself. Wen Zhiyuan also seriously considered Lin Hongnian's words. Perhaps, as the other party said, he was too obsessed with his childhood regrets, and now he can completely let it go, and wished Gu Jiayi and Lin Hongnian a reconciliation.

In the blink of an eye, a few days passed, and the business of the noodle restaurant was not bad. When Zhang Weiguo was about to close, he suddenly welcomed an uninvited guest. He looked up and found that it was the senior brother Lin Hongnian. Compared to his previous high-spiritedness, Lin Hongnian in front of him looked much more restrained and haggard. He timidly took the initiative to apologize to Zhang Weiguo, admitting the mistakes he made in the past.

Hearing this, Zhang Weiguo's eyes turned red, but he finally chose to forgive, and went to cook noodles for Lin Hongnian himself, and kicked the chair while he was not paying attention. Seeing Lin Hongnian sitting on the ground, Zhang Weiguo laughed with relief, the two brothers hugged tightly, and all the past had vanished.

Through his own efforts, Lin Hongnian finally regained his status as a host, and because of this period of experience, he became a little less selfish. Under the recommendation of Lin Hongnian, the female star promoted Zhang Weiguo's noodle shop through Weibo and short videos. Many people came here, and the business became more and more prosperous.

Zhang Weiguo learned about this through Gu Jiayi, and was a little relieved, saying that he would take time to go back to Nanjing to worship the old man by the river. However, not long after life returned to calm, Zhang Weiguo flipped through the old photo albums and accidentally discovered that the "Nanjing" that the old man wanted to go to was actually Nanjing, Fujian.